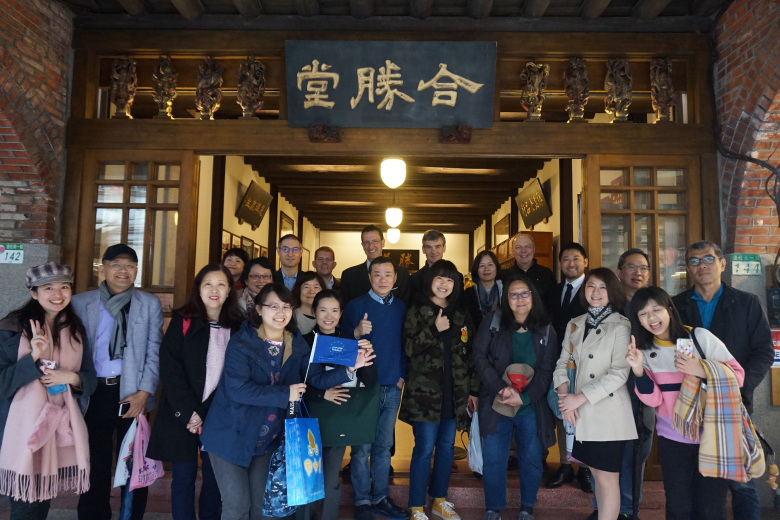 In keeping with tradition, to coincide with the Chinese New Year, the ECCT arranged a special cultural excursion for members. This year's outing was in the form of a visit to the Dadaocheng district of Taipei, the area that was once the business centre of Taipei and is now a popular tourist destination. During the Japanese colonial period the area was a thriving trading district, given its close proximity to the Tamshui River. In its heyday the main trading industries were fabric, tea, Chinese medicine and dry foods (including seafood and fruit).

The tour began at the historical AS Watson & Co building, constructed in 1919 to house Watson's first Western-style pharmacy in Taiwan. The building, which was damaged by a fire in 1998, has since been restored, and now houses several shops and restaurants. Many red-brick buildings that were constructed 100 years ago or more in the area are still standing and, over the past two decades, have been restored to their former glory. Today they house shops, restaurants and design studios, among other businesses. Much of the architecture in the area combines several styles and features from both the west and the east. While the number of fabric shops has declined, there are still many Chinese medicine shops.
A short walk from AS Watsons is the Taipei Xia Hai City God temple, where guests were given a guided tour. Built by Chinese immigrants and their descendants in the 19th century, as a home for their deities, today the temple is famous for matchmaking, where as many as 2,000 couples per year go to seek divine blessings for their unions.

After another short walk, guests stumbled upon the site where the popular Taiwanese series "A Taiwanese Tale of Two Cities" was filmed. The owner of the building was kind enough to let guests take a look inside the traditional house, which retains its original red-brick facade and wooden ceiling.

Guests then moved on to Rice & Shine, a rice-themed restaurant, for lunch. The restaurant is now operated by the fifth-generation owner in a Western-style red brick building that was built over 100 years ago. At Rice & Shine, each bowl of rice is freshly ground and cooked and all the ingredients served at the restaurant come from the local market and merchants.

After lunch, guests visited the 207 Museum. The building that houses Museum207 was constructed in 1962 as pharmacy for Chinese medicine. It was designated an "Historic Building" by the Taipei City Government in 2009 and transformed into a museum in 2017 as an initiative to promote the preservation and revival of heritage buildings in Taiwan. The museum frequently changes its exhibitions. At the time of the tour, the theme was repair and restoration with exhibits showing the various tools that were used a century of more ago to repair pottery, furniture, clothing, tools, umbrellas and various other items.

The final stop on the tour was the Fengwei Fruit shop where guest sampled some of Taiwan's finest export-grade fruits, collected from all over Taiwan, as well as fruit juices and ice cream.

Lunch with the FDA Director-General